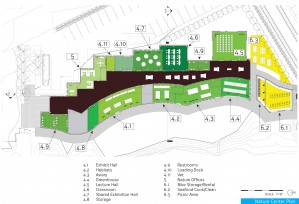 An dedicated overview of my work completed in Revit, including 2D drawings and 3D rendering 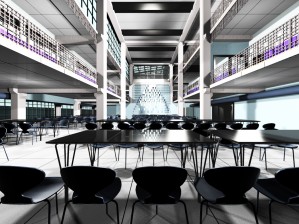 For those with a particular interest in my 3D Rendering, this gallery provides a dedicated look at my work. 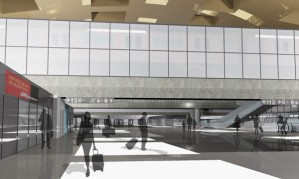 The Aubretia Transportation Center is intended to be a complete inter modal transportation facility combining space for the Aubretia Metro, Amtrak, California High Speed Rail, municipal bus, private cars and shared vehicles. The transportation center combines all of these services into a compact complex where moving between long distance rail and metro is as simple as ascending two escalators. Compared to Union Station or Midway Airport in Chicago where transferring to rapid transit involves considerable walking the goal of the Aubretia Transportation Center is to provide for simple transfers between transit systems. The form of the transit center will seek to evoke the classic train stations of Industrial Age Britain and France, with wide vaulted sheds enclosing passenger space.

The Bellingham Bay Community Boating Center is a non-profit organization located on the historic Fairhaven Harbor of Bellingham, Washington. The center offers boat storage, launching, and classes on boating. The objective of this studio was to develop a plan for the future of the site, aiming to dramatically expand the facilities and propose additional activities to take place alongside the new boating center. My plan consisted of a combination Boating-Nature Center meant to promote a closer connection to the water and its role in life going into the 21st century.

A 80,000 sq. ft, 600 student charter school for Chicago International Charter Schools in the Greater Grand Crossing neighborhood of Chicago. The goal was to use precast concrete to create a sophisticated school of the future. The facade allows the concrete frame to permeate to the exterior, translating into a sense of structural openness and transparency that reverses the idea of a school as a warehouse for children but rather a place to set them free.

1 2 ►
Back to Undergrad
Toggle Sidebar