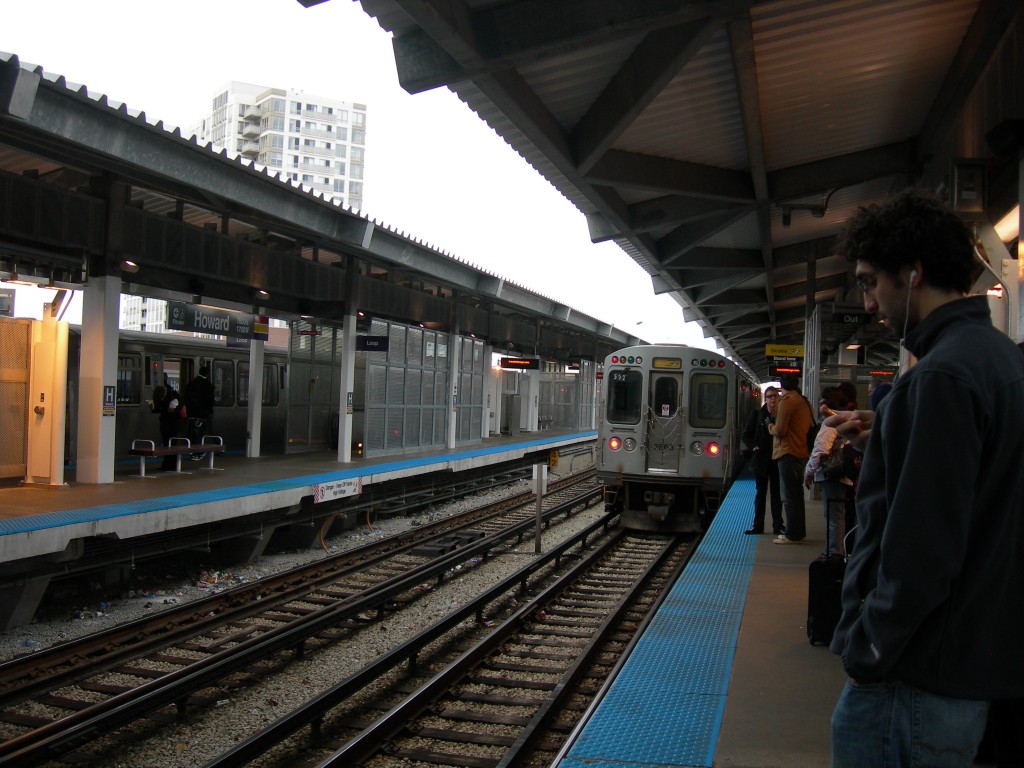 A nice little collection of comments concerning the state of the CTA featured in the Chciago Redeye has this author eager for some comments of his own.  The "improvements" that the CTA has undertaken in the last decade—Brown Line Capacity Expansion, procurement of new rail cars, etc—do not seem to have gone over well with some people.  They haven't really gone over well with me either.

"No crown for Brown" is one rider's take on the new Brown Line.  Apparently the promise of increased capacity has turned out to be rather hollow, with off-peak train frequency insufficient to meet demand.

This comment brings attention to the concept of "tempting fate" that the non-Genry Savvy CTA planners failed to recognize, thus sending them into a potential death spiral.  The Brown Line Capacity Expansion Project increased the platform lengths at all Brown Line stations to accommodate 8 car trains, along with making all stations ADA-Compliant.  Unfortunately, the CTA has slashed "L" service since that project was completed.  The result: trains running less frequently resulting in crowding that the project was supposed to alleviate.  Such conditions will only amplify the existing disdain towards the CTA demonstrated by many riders.  Decreasing ridership would likely reduce crowding on trains, but also cause revenue to decrease leading to further service reductions and fare increases, CAUSING EVEN MORE RIDERS to abandon the system.

The Douglas Branch rehab is yet another project that was a questionable endeavor.  In a Hail Mary attempt to retain riders the CTA decided to spend $482.6 million in order to restore a portion of the CTA carrying less than 10,000 passengers per day.  That's right: the CTA spent nearly $50,000 per passenger in order to keep said passengers riding the "L".  Considering that the Dan Ryan Branch had an average weekday station usage of 50,000 based on data from 2002-2010 renovating the track on that line would have been a wiser move.  The so called "Dan Ryan Rehabilitation Project"that ran in the middle of the decade was questionable at best.  Stations were rehabbed and new interlockings were built to improve operations, but work on the track itself was apparently minimal since there are now slow zones [2] covering almost 30% of that division.  Trains are forced to run express to make up for lost time with alarming frequency; I have had the pleasure of riding several of these trains, which can be nice if you are in a rush and are heading all the way downtown.  The CTA's decision to spend almost half a billion dollars rehabbing a barely used line, to the detriment of the busiest line in the system, stinks to high heaven of political pandering and vote buying.  Politicians in the neighborhoods served by the Red Line would be perfectly justified in crying foul at a blatant attempt to influence Pink Line voters.  A complete Dan Ryan renovation would have been comparatively easy compared to the Douglas Branch since the line runs at-grade in the middle of the highway for pretty much its entire length; no expensive steel structure to replace for one.  Existing bus routes like the 24 and 29 could have easily accommodated the overnight ridership, allowing the entire branch to be shut down for construction in both directions.

"Aisle face-off": the decision to switch to aisle facing seats has this author thinking of John Woo movie puns.  The decision to switch to longitudinal seats used by subways in Asia and New York is another miscalculation by the CTA.  Just like the Brown Line Capacity Expansion Project and the Douglas Branch Rehabilitation, the personnel in charge of capital projects tempted fate and got their asses handed to them by resentful riders.  Passengers have been complaining for months about how the new cars are not right for Chicago.  Complaints range from unwanted views of behinds to fears of impromptu beds for the homeless during the night.

The wider aisles that are supposed to make it easier to move around the crowded cars seem unnecessary given the CTA's inadvertent attempts to drive away their riders.  The fact that trains are slowing down all across the system, especially on the Dan Ryan Branch, means that riders are going to spending a lot more time on the trains.  Unfortunately the new 5000-series cars no longer have seat back grab bars within easy reach [3]; these have been replaced by an orgy of vertical bars [4] and suspended straps that do not seem to work for many riders who have to hold onto them for long periods.  The CTA has made it easier to stand when people would rather be sitting thanks to their lengthened commutes.

No discussion of the new cars would be complete without mentioning the lost opportunities when it comes to technology.  The CTA has endeavored to do the opposite of New York in almost every aspect outside of longitudinal seating.  Forget three doors per side—the 5000 series still has two doors per side in the same old vestibule arrangement.  The New York R142s use a far subtler approach [5] that allows for more space in this area.  Opening up an aisle by several inches may not seem like it would make a difference movement-wise, but simulations after several airliner disasters have shown that it can, especially when it comes to emergency evacuation.  The early 737 had a bulkhead opening only 22.5 inches wide that led to a bottleneck during an evacuation of a plane in England back in 1985 [6].  Increasing the width to 30 inches had dramatic results during tests.  The traditional 2x2 seats at one end of the new 5000 series cars negate the advantages of a wider aisle, creating a bottleneck near one vestibule and potentially threatening passengers lives in the event of an evacuation.  The CTA should have gone with an all-or-nothing seating arrangement instead of trying to cling onto 2x2 seating while introducing aisle seats.

The hybrid seat layout of the new rail cars is another example of the CTA's insistence of trying to please all of its passengers.  The Douglas Branch Rehabilitation was a blatant example of a local earmark designed to benefit a small percentage of CTA riders at tremendous cost.  There are stations like Kostner on the Pink Line that serve less than 500 riders per day; in addition to low ridership, Kostner appears to be an armed robbery magnet.  Closing such stations would not only reduce labor costs but potentially keep passengers safer by discharging them at busier stations.  The CTA has closed dozens of stations in its history; the Douglas Branch Rehabilitation now represents a missed opportunity to eliminate redundant stations.

"Blue Line blues": the CTA's desire to be avoid being portrayed as insensitive is exemplified by the fare policies being enforced at terminals.  I once rode the Blue Line at 4 AM and the few riders onboard were homeless sleeping.  I'm reasonably confident that the remarks of one CTA rider in the aforementioned Redeye article are 100% true: people will ride the CTA back and forth all night.  Homeless using the CTA "L" as a shelter degrades the cleanliness of the system, alienating customers during the day.  The chronic funding woes have undoubtably affected the CTA's ability to clean their trains and stations which doesn't bode well for the passenger experience, especially with the new aisle seats allowing for easier sleeping coming into service in the next few years.  Apparently the CTA has decided that their desire to cater to everybody extends to people who don't even pay for most of their rides, and now they have unwittingly played into those people's hands by designing cars that will make it easier to convert trains in roving shelters.

There is talk of extending the Red Line farther south to 130th St, which is somewhat justified considering that the Red Line is the busiest line and 95th is definitely crowded.  However, considering the problems that the Dan Ryan Branch faces today, the wisdom of this move is questionable.  Proponents point out that the new extension would connect to the South Shore interurban and Metra Electric, which begs the question: Why ride the slow Dan Ryan Branch which will only get slower without major rehabilitation when you could ride the Metra Electric which is arguably faster and more comfortable?  But that's a discussion for another day...