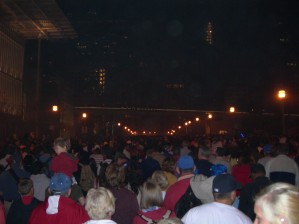 Long story short: the performance of the Red Line Saturday night during Pride Weekend was yet another example of the CTA’s inability to function correctly during major events. 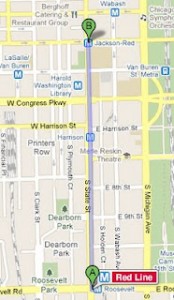 After riding the 151 Sheridan bus from Belmont to Adams in a relatively brisk 25 minutes, I arrived at the Jackson Red Line station around midnight to see a train seemingly stuck at Harrison a short distance down the tunnel.  After at least thirteen minutes (according to my watch, which I looked at after reaching the bottom of the stairs only to see no trains arriving or departing southbound), the train at Harrison began moving again.  Shortly thereafter Red Line run 940 I believe arrived at Jackson.  When we departed Harrison we found ourselves stuck again behind the cursed Red Line train.  After finally making it to the Roosevelt platform, the train I was on came to a halt for over five minutes.  Shortly after my departure to secure alternate transportation, the 940 continued on its way.  This was at approximately 12:30 AM, roughly a half hour after I arrived at Jackson; at least fifteen minutes passed between departure from Jackson and departure from Roosevelt.

This whole incident should seem oddly familiar to anyone that rode the Red Line southbound during New Year’s 2011.  The combination of crowds, many of whom were likely intoxicated considering the occasion, and the late hour caused the Red Line to bog down.  The Brown Line train I had taken to Lincoln Square when I was heading to my New Year’s festivities came to a halt at Sedgwick because someone in the last car had apparently passed out on the train.  Fortunately an army of taxicabs was waiting on North Avenue, and I was soon on my way with time to spare.

When I rode the CTA after the July 4th Fireworks downtown in 2009 I managed to catch the first Brown Line train that arrived at Randolph and I made it to Belmont with practically no major delays except for crowds moving on and off the train.  Once the cutbacks in service took effect I noticed the L’s performance during major events start to decline.  New Year’s was the first sign of trouble but easy to shake off considering all the alcohol and party crowds.  Now with this second incredibly negative Red Line experience of the year, I think I’m probably going to avoid riding the CTA during July 4th.

All of these problems can be explained by a simple rule: when you cut service, quality declines.  The CTA is not going to save itself by continually cutting service and raising fares.  While ridership declines may be offset by higher fares, the hazard is that there are going to be fewer and fewer people invested in rapid transit.  This could lead to a negative feedback loop where people leave the system, fares go up and service goes down to compensate for reduced ridership, and then even more people leave the system.  As far as July 4th goes, I’d recommend keeping a 20 in your pocket for an emergency taxicab in case you get stuck downtown.  If you’re lucky to get a taxi cab…