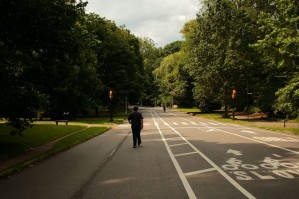 A recent visit to New York resulted in my attention being drawn to the differences between Chicago and New York when it comes to the design of outdoor recreation paths. The Chicago Lakefront Path is a simple bi-directional path where pedestrians and cyclists intermingle in a less than harmonious fashion on occasion. This is a stark contrast to New York City where the recreational paths have the right-of-way for various users delineated with clear markings and signage. In general, paths are arranged from left to right in the following order: pedestrians, cyclists, and vehicles. In places like Central Park and Prospect Park, as shown in the above image, paths are explicitly one way. This system practically eliminates the possibility of head-on collisions between cyclists since there is no passing traffic in the opposite direction to worry about; cyclists only have to ensure that there is enough room for them to pass without intruding into the pedestrian lane. The path in Prospect Park even has a buffer area marked off to train people to keep a distance from the bike lane. 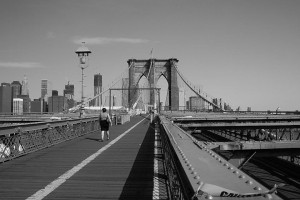 Narrow paths like the one on the Brooklyn Bridge have the left hand side (facing north) reserved for pedestrians and the right hand side reserved for cyclists. The condensed and expanded systems both have one thing in common: traffic is separated from left to right according to speed. The slowest traffic, pedestrians and joggers, travel on the left side while the fastest vehicles travel on the right. Another advantage of situating the vehicle lane on the right hand side of the recreation path is that it is always on the “outside” edge when it comes to the park. This means that vehicles leaving or entering the park do not have to cross pedestrian and cyclist traffic lanes in most cases.

Chicago cannot use the unidirectional system for obvious reasons on the Lakefront Path. The pedestrian-left/cyclist-right system used on the Brooklyn Bridge could be implemented, however. This would significantly reduce the problem of fast moving cyclists having to pass slower pedestrians. Unfortunately, lane markings alone are not sufficient to ensure proper adherence to the rules of the path. Pedestrians routinely walk in the wrong direction on recreational paths, and gaggles of people can completely block the flow of traffic at times. 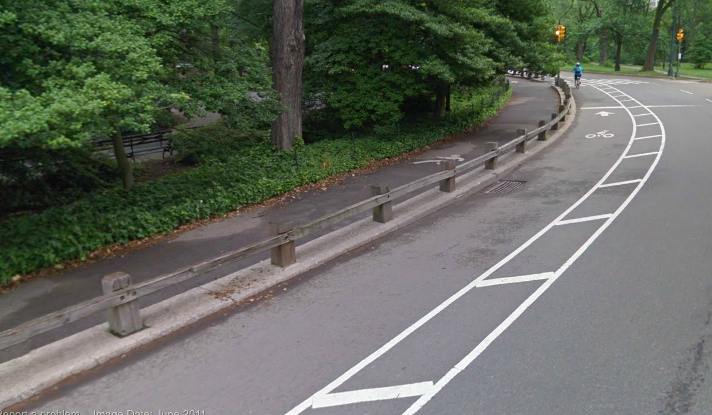 One solution to pedestrian interference with cyclists would be to physically separate the pedestrian and cycling lanes. Some sections of the Central Park recreation road have a short fence between the pedestrian path and the cycling lane to further discourage interaction between the two groups. This does not prevent joggers from using the cycling lane, though. Only repeated reminders of etiquette through the use of signage and outreach by various interest groups will help keep different groups separated and reduce the opportunity for accidents.

This does bring up the issue of responsibility for avoiding collisions in a shared traffic lane. Even if there are separate lanes for pedestrians and cyclists such a system in itself cannot ensure proper separation, unless there are actual civil penalties for improper lane usage. Cars cannot go the wrong way down a one way street for instance; such an action is a violation of the rules of the road and carries a penalty. Unless a similar system for recreation paths is implemented the signage and lane markings are purely advisory. A cyclists who hits a pedestrian in the cycling lane, even if they are at fault, could conceivably argue that that the collision would not have occurred if the pedestrian had observed the lane markings and stayed in their lane.

This issue of cyclist-pedestrian interaction is perhaps not as visible compared to vehicle-pedestrian interaction which involves numerous deaths every year. It still deserves more study, especially with the increasing amount of cycling traffic in this day and age combined with vigorous lobbying by health groups for more exercise in industrialized societies. I look forward to tackling the cyclist-pedestrian issue in the future.