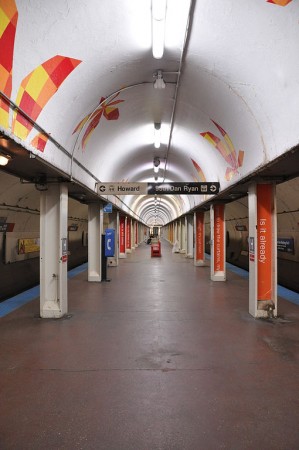 At the end of 2010 I conducted an analysis to support my thesis work concerning transit design that involved combing through public Chicago Police Department reports concerning crime occurring on the CTA EL.  I identified two stations in particular—Pulaski on the Blue Line and Harrison on the Red Line—as being the stations that were in my opinion crime hotspots.

For me this was no surprise since I had identified Pulaski as the most likely spot for a violent robbery on the Blue Line.  Statistics may mean nothing to the individual but clearly I identified something about this station and its surroundings that made it a prime candidate for a serious crime.

Again!  The station I had identified as the most likely station on the Red Line for violent crime was the station that was in the news.  Once I saw the words CTA and ROBBERY I just knew it had to be Harrison.  Clearly the CTA and Chicago Police need to figure out what is going on at these two stations.