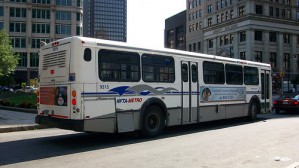 The #6 Sycamore bus travels between Waterfront Village south of Downtown Buffalo and Walden Galleria in suburban Cheektowaga. Walden Galleria is an important economic engine for the Niagara region, attracting thousands of Canadian shoppers to the Buffalo area every week. The #6 Sycamore bus is a vital link between Buffalo and Walden for shoppers and employees, being one of only two bus routes (alongside the #32 Amherst) that provides a one seat ride to this major commercial center. Unfortunately this level of service has become increasingly dismal in my opinion.

The end of the summer season provided some relief from crowds on the NFTA buses, especially during weekends. Now that winter is almost in full swing the crowding situation on the #6 bus has returned, reaching a point where for the first time in four months I was left behind at a stop because there was no more space. The Sycamore bus only runs every 30 minutes during non-peak hours, a woefully low level of service considering that it serves one of the largest retail employment centers in the entire metropolitan area, and employees there are more likely to use public transportation to get to work especially considering the demographics along the route. The fact that the bus that left me behind was the bus before the bus that I would need to catch without being late to work only added to the insult, making my prudence moot.

The Sycamore bus is frequently crowded outside of the traditional weekday rush hour period. The bus runs that I frequently use are between noon and one PM, and the buses are frequently standing room only as they leave downtown. Weekend buses are worse as the headways can grow to over one hour. A recent Saturday trip saw standing room only and frequent delays during the boarding of passengers. Even worse, the crowding situation was only relieved well into the run when the bus had already completed around 75% of the route between Walden and Downtown Buffalo. In the end the bus run almost 12 minutes behind schedule by the time it reached downtown Buffalo, which is over 30% of the estimated run time.