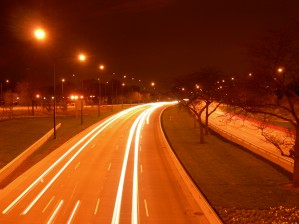 The lake shore express buses are one of the few positives about the CTA.  If someone’s destination is the far north side they can use the 147 Outer Drive Express bus to reach their destination instead of the Red Line.  While the CTA has historically had express service on the L and continues to use express service in the form of the Purple Line rush hour service to Evanston, it isn’t tremendously useful in its current incarnation.

The Purple Line Express has several flaws that limit its effectiveness to commuters and reduce its attractiveness to city residents.  The primary problem with the Purple Line Express is the shear number of stations it serves in the Loop and River North neighborhoods.  Express services are most effective when they have a minimal number of stops; each additional stop increases the complexity of the service by introducing an increasing number of commuter types.  Short haul commuters find themselves fighting against long haul commuters when they need to exit the train as a result.

The Purple Line would be more effective if it traveled express all the way to Fullerton after leaving the Loop.  Unfortunately this is no longer possible due to the removal of the express tracks south of Armitage.  While these tracks were removed because of structural problems their absence has resulted in a lost opportunity to increase capacity.  The Brown and Purple lines are now interlined for a significant amount of the Brown Line’s length, which limits each line’s capacity.  Purple Line Express wait times are already longer than average, so missed trains means more commuters crowding platforms and competing with Brown Line riders.

The 147 Outer Drive Express does not suffer from any of the aforementioned problems.  After Michigan and Delaware just north of the Magnificent Mile the bus runs express for almost six miles to Foster and Marine in the Edgewater neighborhood in about 13 minutes.  All the times I’ve ridden this bus it has consistently made this run in the alloted time even during rush hour.  5.8 miles in 13 minutes equals an average speed of approximately 27 miles per hour which is an impressive speed for a bus in urban conditions.  During times I have ridden the bus from Wacker to Foster and back it has managed to make the trip in approximately 25 minutes.  This is consistent with the published schedule and a slightly faster than the Red Line.  The Red Line has a lot more stops between downtown and the north side than the 147 so the chance for delay is greatly increased; 27 minutes from State and Lake to Berwyn is optimistic on a good day.

The Outer Drive Express is an example of effective express bus service, dedicated to collecting passengers in the commercial core and then shuttling them as fast as possible to a residential area.  Suffice it to say, I will be using the 147 to travel to the north side from downtown from now on.